When I began the blog nearly 8 years ago, I wanted to do some kind of photoblogging that could be done on a regular, perhaps weekly basis with ease. A lot of people were doing “Saturday cat blogging”, which I found a little tiresome but it was something amusing to add to the big conversation going on, and I wanted to be part of that conversation by contributing to it. The mountain/city view from my terrace is beautiful and constantly changing, and seemed a good enough choice. So let’s have a last look around.

There have been so many changes to Innsbruck, architecturally speaking. While the little Altstadt retains its Medieval look, the areas just outside it have been changing in leaps and bounds. Here are the ones I can remember since 2000, when I arrived, starting with the changes observable right outside my window: 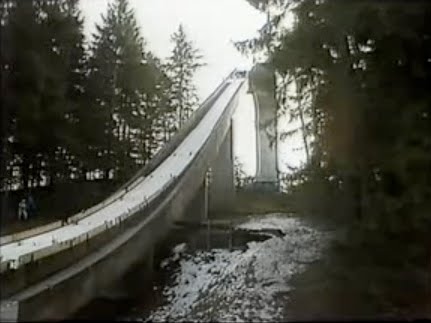 The old one demolished in 2001 (I watched from my apartment), the new one, by star architect Zaha Hadid, opened in 2002. 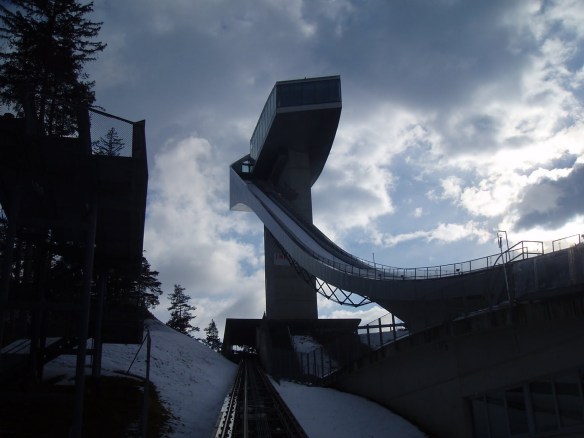 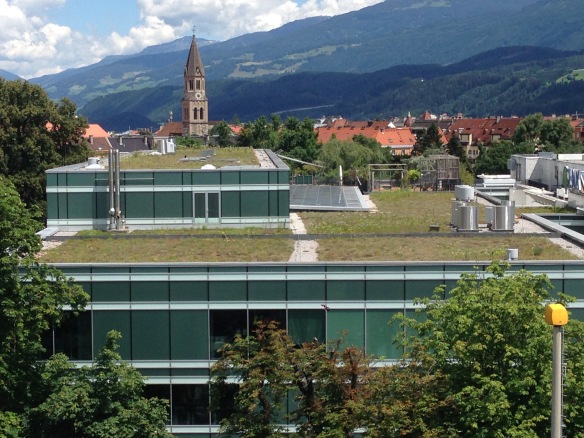 I like the extra mall shops (and the green roof!) I don’t like the plaza (Vorplatz) for one reason: its acoustics. The shape of it triggers sound — people talking, music, drumming — to ricochet right up through our windows. It has gotten much louder here over the years. Last night a crowd of twenty-something girls were doing some kind of ritual screaming at the beach bar, over and over. They were there for hours.

Amraserstraße/Museumstraße/Brunecker Straße
An old, antiquated Post Office building stood on Brunecker Straße, and for a time I went there to pick up packages. Now the sleek, golden brown Pema Tower takes up most of that block, provides cover from sun and rain on that side of the street, and holds a few nice new businesses. The empty lot on the Amraserstraße side is currently a construction site for another tower. The bus/tram stop has been fixed up nicely too, and a pedestrian tunnel installed. 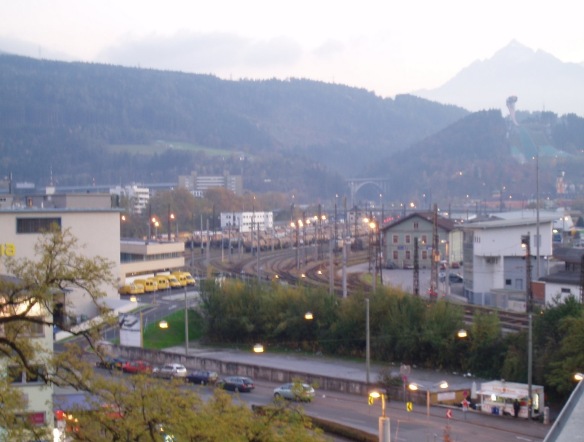 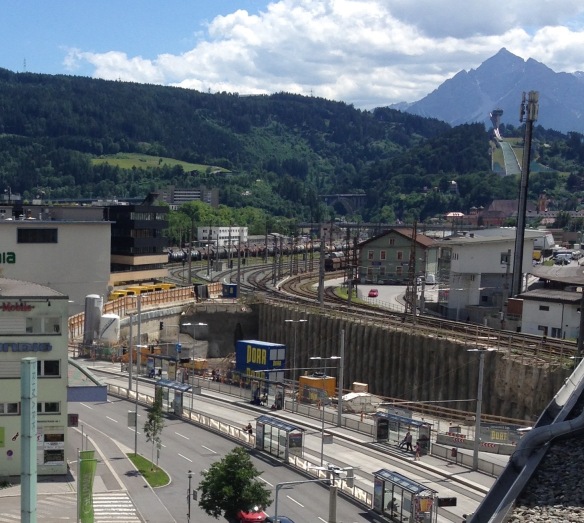 Die Sill Insel
This was a dirt parking lot, if memory serves me. There was some kind of old loading depot building which had some use in the alternative scene, and a little pink villa of sorts which I believe housed modern art. I often wondered what their original purpose was; they may have belonged to the Ferrari Palace (now a vocational school) across the street. Perhaps cargo was pulled off the Sill Canal and loaded on wagons there. The little house, I have no idea. On that site now stands a new apartment building. (It hasn’t destroyed the view, but I did have to get used to idea that other people now stand on their balconies and look over at me.) 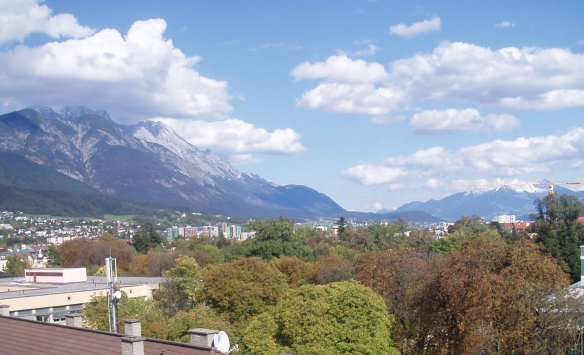 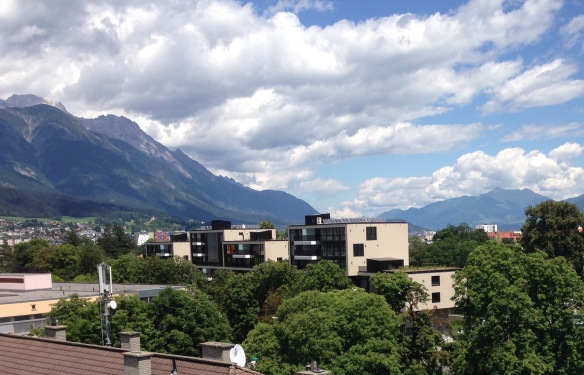 What else has changed? The Hauptbahnhof is new-ish, having reopened in 2004.
The Tiroler Landestheater opened its new annex in 2003, with rehearsal spaces, offices and workshops.
The Rathaus Passage and Kaufhaus Tyrol, both on the Maria-Theresien-Straße,  are two new urban shopping malls which, judging from the masses who go there, seem to be doing very well, despite my insistence that the latter, formerly Bauer & Schwarz, was cursed. The gods of commerce won that battle. Bauer and Schwarz would probably have approved.)
The Convention Center (Messegelände) was taken down and replaced with a newer, larger one.
The Hungerburgbahn was redesigned, with two new stations also designed by Zaha Hadid. The line was extended over to the Hofgarten, where the city tourists can reach it more easily.
The Tivoli football stadium was renovated to seat the larger crowds of the European Championship in 2008, with extensions which, by design, can be added for larger events and later removed.
The streetcars were replaced with the current red, noiseless version. I missed the old ones for a while but quickly got used to the new ones, especially since the Iglerbahn now quietly slithers through the forest, Innsbruck’s own Tatzlwurm.
A less-vaunted change was the demolition of the Bürgerbräu brewery on Ingenieur-Etzl-Straße, on which now stands a modern glass building of businesses below and apartments above. The not-unpleasant smell of hops used to waft through the air on warm summer nights. They made Kaiser Bier, and certainly there was a connection with the Kaiserstube restaurant, just around the corner on Museumstrasse. Below, both Bürgerbräu and the old streetcars. 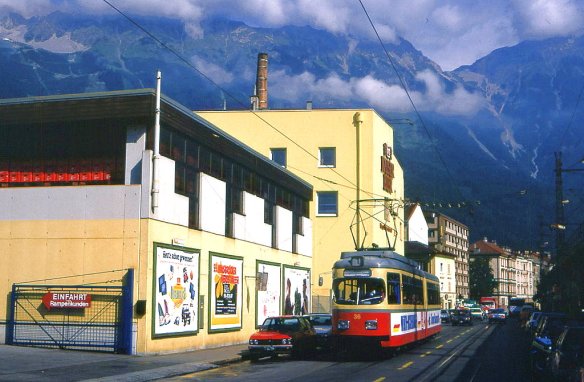 The Stadtsäle is going to come down this summer. This postwar structure was erected after the older Stadtsäle was condemned and demolished. A rather beautiful and ornate palatial hall from 1890, 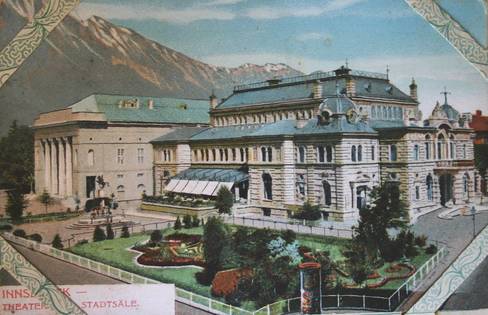 it succumbed to allied bombs that fell over Innsbruck late in the Second World War. I have always thought of the current Stadtsäle as our local version of the Palast der Republik, useful, ugly, but aesthetically interesting in a “retro” way. 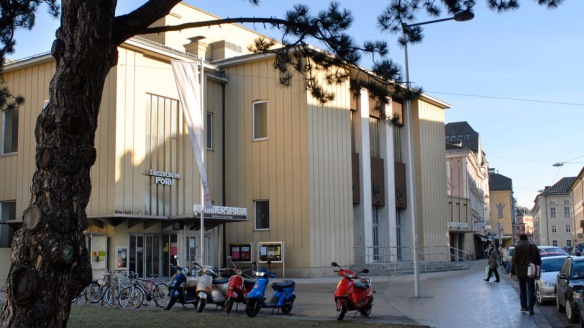 When it’s razed, the Landestheater’s Kammerspiel will go along with it, and a new Kammerspiel will take its place. I have many fond memories of this 200-seat theater. You can say I cut my teeth on that stage. 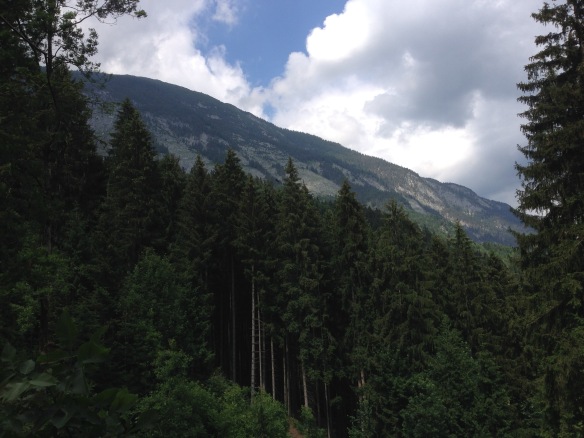 A half-day hike above Stans to the Maria Tax Chapel. Taxen  is an old regional word for Tannen, or fir tree. Legend has it that the Virgin Mary made an appearance here in 1616,  leaving behind her handprint on a stone, a picture of which was then attached to a tree for people to come and revere it. So we have here both a stone and a tree of religious importance (I was able to find neither, unless the stone is now part of the fountain behind the chapel*.) 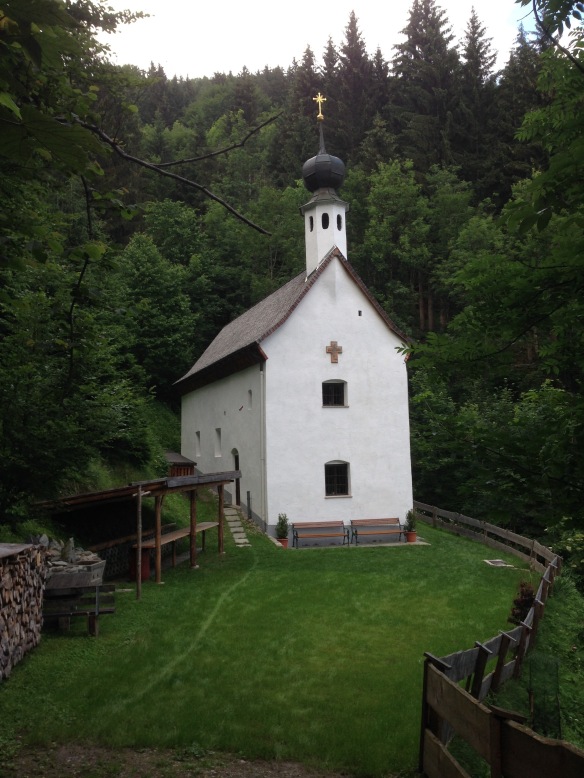 In 1627 a wooden chapel was built, in 1667 a stone one. In the same year the first hermit moved into the sacristy. 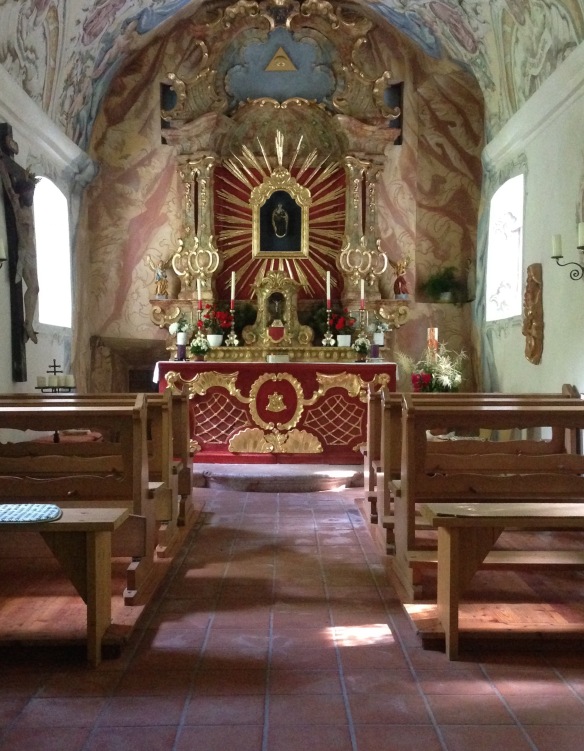 Sacred trees were a thing with the pre-Christian inhabitants all over Europe. Christianity treated the worship of trees as idolatry and this led to their deliberate destruction. From this site I learned a little more (translation mine):

When St. Boniface took an axe to the sacred Donar’s Oak at Geismar, Germany in 724, and didn’t get struck by lightning for it, he was able to proclaim the victory of Christianity. One sacred tree after another fell, and the Teutons were forced to drop their local religion and accept Christianity. Nevertheless many may not have forgiven Boniface for this desecration; he was slain 754 by the Frisians. According to many legends, when a sacred tree is cut, it bleeds from the sacrilege. Therefore the woodcutter asks the tree for forgiveness before cutting it. And many legends report of cruel punishments for messing with sacred trees . Ultimately behind such legends is the idea of the tree as seat of the Godhead. From a fiery burning bush God speaks to Moses; to Joan of Arc from the branches of a tree. The Buddha’s enlightenment takes place under a tree. The old-rooted idea of the sanctity of trees survived within Christianity and continues in myths and legends of holy images on or in trees. Particularly frequently encountered are sightings of Mary, or her image, in a tree. Many names of pilgrimages hold the discovery of a miraculous image in trees, such as “Mary of the linden”, “Mary of the fir tree”, “Mary in the hazel”,  “Mary of the larch”…

Further along on the trail, a pair of Steinmänner guard the way. 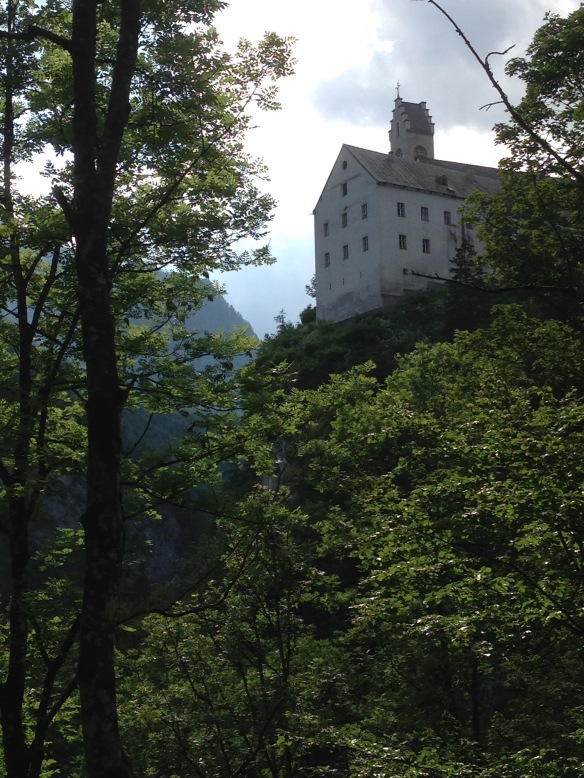 Thirty minutes later, the St. Georgenberg-Fiecht Abbey looms above. I’ve been here before, but it’s getting late and so I turn in the direction of home by way of the Wolfsklamm. 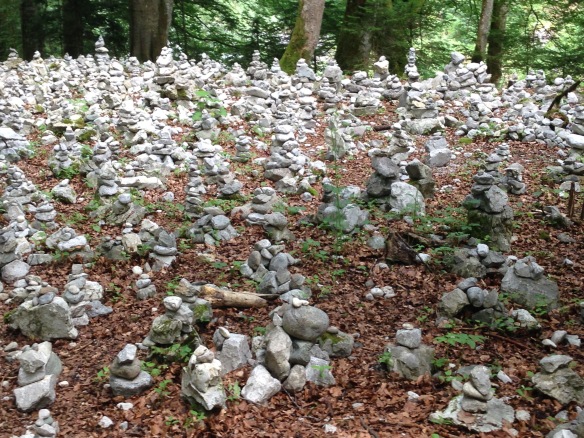 An army of Steinmänner! It’s like an Alpine version of the Terracotta Warriors, or the Kodama tree spirits in “Princess Mononoke”. How delightful and unexpected. 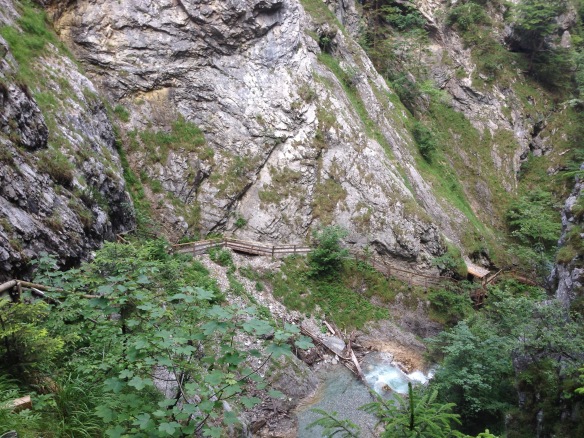 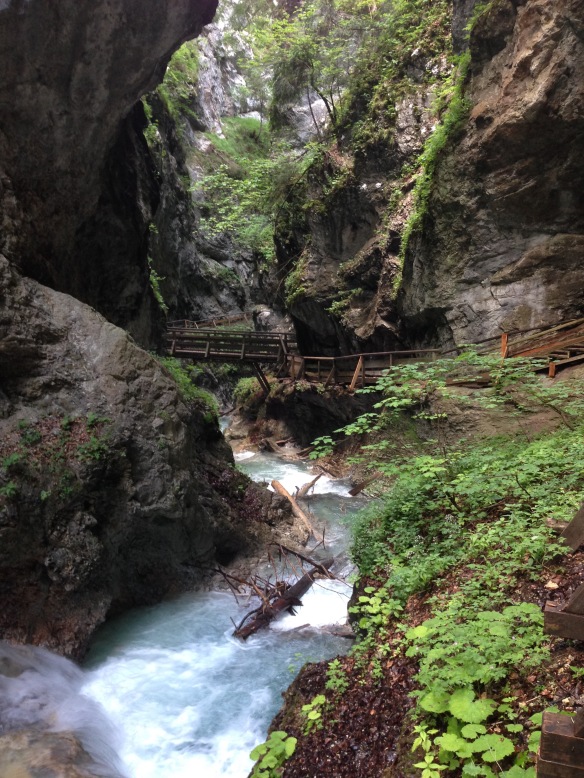 The Wolfsklamm in Stans has been renovated [Sorry, that’s the Partenachklamm! But the Wolfsklamm bridges have all been rebuilt with sturdy new boards.] the gorge is still impressive and well worth the €4,50 “toll”.

*The Schwazer Heimatblätter suggests a different origin: that the St. Georgenberg Abbey was having an image problem with pilgrims, due to a prominent prisoner being kept there.  It’s suspected that the monks themselves started the Mary-was-here story in order to keep the pilgrimages coming — that kind of thing is profitable for monasteries, after all.