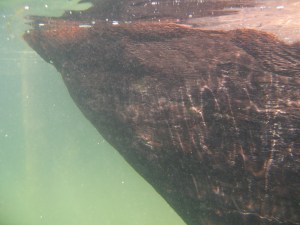 A few weekends ago I was given the opportunity to hang around a group of divers from the Bavarian Society for Underwater Archaeology as they “unearthed” an Iron Age logboat from the lake bed of Starnberger See. The boat had been discovered by divers a few years ago and had been transported over to a municipal boathouse, where it was left untouched until recent construction plans forced it to be taken elsewhere. Below is a photo of the boat as it was found this month, filled with sediment and trash brought in on the waves. Only the prow of the nine-foot-long logboat is visible. 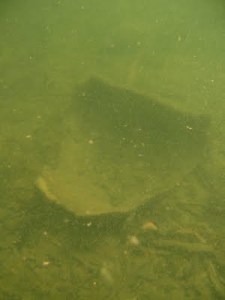 The first thing the divers had to do was set up a gas-powered water pump, with which they spent hours (until dusk on Saturday) vacuuming out the sediment from inside and around the boat, so that it could be moved.
The next morning, more divers showed up, and the heavy lifting commenced (literally; the logboat, underwater for over a thousand years, weighed like a rock now.) 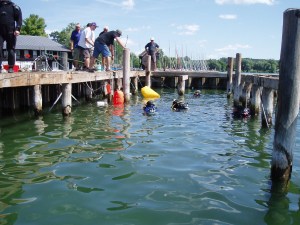 >The divers were pretty laid back about my presence there, and didn’t even mind when I donned snorkel gear and went into the water to get some better pictures (one of them even asked that I take some more!) I was careful to stay out of their way as they were working.

Below, the logboat has been pulled up out of the lake bed and fastened to a pontoon raft.It is important that it stay in the water, since with exposure to the air it would begin to decay. 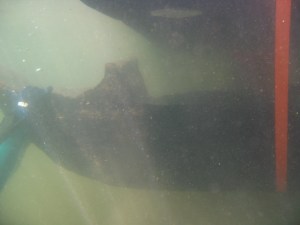 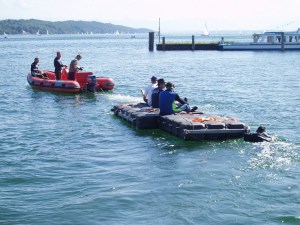 The logboat, securely attached to the pontoon, was hauled away at a slow, careful speed to an archaeological site across the lake, near Kempfenhausen. There, in protected waters, it was lowered onto the lake bed and wrapped in a protective tarp, like a body in a burial shroud. A plexiglass plaque was attached to it, and it’s location fixed with GPS for future research. 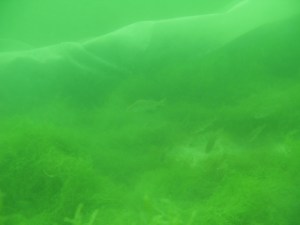 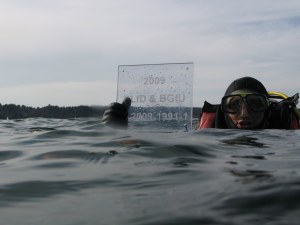 What an honor to have been allowed to observe this project! Many thanks for that to Marcus, the team leader, and to the beau for the use of his underwater camera (and for use of his photos at the protected site.) 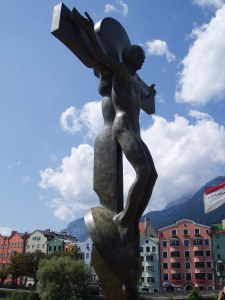 Weird local news of the week: This article turned up in the headlines at the U.S. version of Google News. Assuming that there must be a local discussion going on, I searched the German-language google sites as well as the local papers but found very little. Funny how it ended up over on the U.S. site, then. Do you think there are people who trawl the nets looking for anything that might remotely resemble a sex scandal?

INNSBRUCK, Austria (AP) – An anti-pornography activist wants officials in the Alpine city of Innsbruck to take down a large crucifix bearing a sculpture of a naked Jesus Christ.

Martin Humer, who gained notoriety last year after he painted part of a statue of a nude Mozart and stuck feathers on it, is pressuring authorities to remove the crucifix from a public square where it has been displayed for 20 years, public broadcaster ORF reported Thursday.

Humer, an 82-year-old former photographer, said he and about 100 supporters were organizing a protest for Friday.

Mayor Hilde Zach dismissed the fuss and said she would refuse to remove the crucifix, insisting it is a work of art and is in no way pornographic.

Here’s a photo of the crucifix so you can see it for yourself. Not only is this Jesus naked, he’s appears to be completely sexless as well.
I like Frau Zach. She’s not only a big supporter of the arts, she actually comes to concerts and theater performances on a regular basis. Local musician friends have told me that several of them were waiting outside a classical concert venue, ticketless, when the Mayor arrived. Learning that they had no tickets and that the concert was sold out, she went in and arranged standing room for them. She’s OK in my book.