Along with the Sunderburg and the pre-Christian grave mounds hidden here and there, the area immediately north of the Ammersee also contains two fairly well-preserved Celtic Viereckschanzen, rectangular earthen enclosures, called Holzhausen 1 and 2. Their function is disputed among archaeologists as to whether they held sacred groves or were built for more practical purposes as forerunners to medieval city walls. They were certainly large enough for whole clans to live in them, being roughly 100 meters long and 75 meters wide, which would make for an unusually wide football field.

Holzhausen 1 has an entrance gate, or at least a higher break in the wall where a gate would have been built. A nearby sign suggests how one would have looked.

A path now leads along the top of the wall, bringing the visitor all the way around and back to the gate.

Inside the wall is meadow, and, interestingly, a small copse of young trees about right in the middle. Much older trees had stood here but had been cut down. We didn’t count the rings in their stumps but there were many. Possibly someone is maintaining their own sacred grove.

At Holzhausen 2, the forest has taken over. The ground inside the wall has filled in over time so that the earthwork is now more of a plateau. Here is the edge, from above on the wall.

Here again, just about in the middle of the Schanze, an unusual circle of plant life. I’m going to assume that fires were made here in the recent past, and the wood ash left the earth especially fertile for this plant. I’m not very romantic about the past — I tend to think people had way too much to do trying to stay alive and healthy and keep what they had, than to put all this work into a little sacred circle. But hey, that’s me. It’s clearly someone’s sacred circle now, and it’s nice to know that these someones are caring for this speck of land.

By each Schanze is a small sign explaining the site, and nothing more. Better that way — it’s not easy to find, not easy to reach (we took our mountain bikes), and less liable to be wrecked. Holzhausen is just south of Fürstenfeldbruck, near Schöngeising, 40 kilometers west of Munich.

High above the Amper River lies a mountain spur known as the Schlossberg (Castle Hill) or the Sunderburg, where evidence has been found of settlements from different eras. Excavations have shown that people lived here as early as the early Bronze Age (app. 1700-1600 BC). and there have been finds belonging to the Urnfield Culture (app. 1200-800 BC, and there are indeed grave mounds nearby.) In the Hallstadt Culture years the settlement was apparently abandoned. I have no knowledge as to whether the Romans used the hill for any strategic purpose, although it is rather close to the Via Julia, the roman salt road which ran from Salzburg to the Donau at Günzburg. 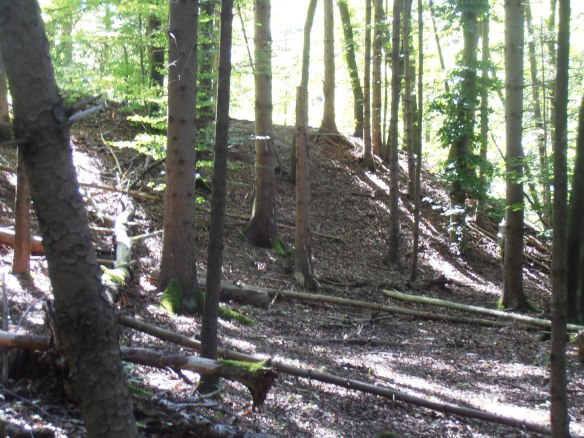 In the 11th century a fortress was allegedly erected on the hill by Count Friedrich of Diessen-Andechs, and Middle Age archaeological finds confirm this. The name Sunderburg was first mentioned in records in 1447. The House of Wittelsbach built a hunting lodge there in the 16th century.
On the steep slope to the river one finds mixed forest an, below that, rare flora in the wetland meadows downriver.

There is no information on hand about the earthwalls an the plateau, they could have been constructed in any of the periods where people used the hill.
An old local tale about the Sunderburg tells of it going under with all its inhabitants and treasures. A peasant, finding glass shards on the ground, took one home to find it had turned to gold. When he returned for more shards, they had all vanished. Another story tells of two pails of gold deep in the castle well, guarded by spirits which cannot be banished, which sinks further into the mountain every year. Similar stories of ancient gold in ancient fortresses can be found in Tirol, and probably wherever old, pre-christian settlements are known to have been. The locals may have known nothing of those prehistoric people, but the myths and legends often contain something of them.