When Theophilus Gates, the founder of the Battle-Axe religious movement, passed away in 1846, the “indomitable” Hannah Williamson succeeded him as leader among the saints. She was already well-known in “Free Love Valley”, preaching and prophecying in the fields and roads.

She also became attached to the Stubblebine family. One mate, however, could not suffice for this remarkable woman. In the long log house near the Cold Springs, lived young Dave, Dan and Hannah. Dave was a carpenter, Dan a smith. The brothers farmed a little, but their specialty was small hand coffee mills. Dave did the woodwork, Dan the iron, and when they had a supply they took them to Philadelphia. The carpenter shop was in the log house, the smithy back in the woods, and there was a springhouse over which Hannah had a room for herself.
The state had already seized a thousand dollars in cash, cattle and farm goods for the support of Dave’s discarded wife. When his brother-in-law had endeavored to inform Dave of the hearing at Court upon this question of who was to provide for the upkeep of Catherine Stubblebine, he had refused to receive the paper, or to hear it read, observing that it might as well have been left in West Chester, and that no honest man would have anything to do with it. Catherine continues to live with her brother in the valley, and was an important witness at the trials of 1843, where her husband was dealt a sentence of eighteen months imprisonment.*

Hannah, as the world was learning, thought and acted in superlatives, measured life in the grand proportions which her torrential emotions demanded. When she found herself with child, it was a new messiah that was to be born, and when the baby died, it was laid away to await a mighty resurrection. Twice “Christ” was born in the log house, and buried, once under a great Chestnut tree nearby, once in a field by the road.

Valley children used to pick through for the log house’s rubbish heap for discarded round pieces of wood, cut from the tops of the coffee mills, to make wheels for their wagons.

But it was always with a thrill of terror that they passed the small hollows in the ground that marked the graves. At night, with the tangled shadows and the ghostly rustling of the woods about one, it was a difficult matter to get past at all. Even older people had a solemn stare for the places “where they buried Christ.” The neighbors feared both the place and its people. Israel Miller said he would not go to the log house for the best horse you could give him.

* Along with several others, for disregard of marriage law.

In the northern part of the ground moraine flatlands near the villages of Grafrath and Mauern, south of Fürstenfeldbruck, stretches one of the largest pre-historic grave mound necropoleis in Bavaria. Systematic surveillance has revealed at least 124 mounds. It is possible that more grave mounds existed outside the forested area, but were worn away over centuries of farming and building. 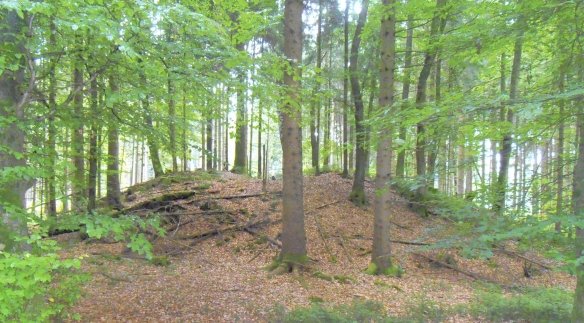 Research into this grave mound area began in the late 18th century, through the efforts of a local minister who made an early map of the mounds. Some excavations occurred in 1839 and 1870.  Later, in 1893, the Munich historical painter Julius Naue dug out 93 of the graves. Part of the finds are in the Archäological National Collection in Munich.

In the customs of the times, the dead were buried in their traditional clothing along with fine jewelry and vessels containing provisions. Some of  the men were buried with weapons. Some cultures buried cremated remains. The oldest burials are from the middle Bronze Age (1600 B.C.) Later burials occurred in the “Urnfield” culture in the late Bronze Age (1200-800 B.C.) and especially in the early Celtic “Hallstatt” culture (800-500 BC). The most recent, from the Celtic “Latène” era (500-100 BC,) consist of burials in existing mounds.

Thanks to the Fürstenfeldbruck Civic Trust for putting up this information on their nahTourBand walking trail.

Also special thanks to the guy who manages the Kraftvolle Orte website, which lovingly details what appears to be every single Pagan sacred place in Bavaria, including directions and GPS coordinates.. Gotta love those Germans.

Looking for other archaeology sites on the local map, one stumbles across other, less expected things. For example, a KZ (concentration camp) cemetery outside of the small lakeside town of Utting, where there had been a tannery which made use of forced laborers from Dachau — there were satellite camps all around, this was Camp 5 (Lager V).

We almost didn’t find it. In fact we had come to a dead end in a field and started to turn back, when a local came by on his bicycle. When he heard what we were looking for, he generously walked us there (we never would have found it on our own, once we saw where we were headed — through a patch of forest,  someone’s back lawn and  a wooded archery range — but we had come in from the wrong road, it seemed.

About 500 male prisoners worked here from August 1944 until April 1945. This cemetery is for the 27 who died from the brutal treatment.

A large stone inside the cemetery wall commemorates the 27 victims, from “the rescued compatriots of Schaulen” (Šiauliai, in Northern Lithuania, was an important leatherworking town. Which explains why its sons were brought to the tannery).

In my research I came across this poem by Yehuda Amichai, translated into English by Chana Bloch and Chana Kronfeld. The description could fit just about any of these little memorial graveyards, including this one.

“A Jewish Cemetery In Germany”

On a little hill amid fertile fields lies a small cemetery,
a Jewish cemetery behind a rusty gate, hidden by shrubs,
abandoned and forgotten. Neither the sound of prayer
nor the voice of lamentation is heard there
for the dead praise not the Lord.
Only the voices of our children ring out, seeking graves
and cheering
each time they find one–like mushrooms in the forest, like
wild strawberries.
Here’s another grave! There’s the name of my mother’s
mothers, and a name from the last century. And here’s a name,
and there! And as I was about to brush the moss from the name–
Look! an open hand engraved on the tombstone, the grave
of a kohen,
his fingers splayed in a spasm of holiness and blessing,
and here’s a grave concealed by a thicket of berries
that has to be brushed aside like a shock of hair
from the face of a beautiful beloved woman. 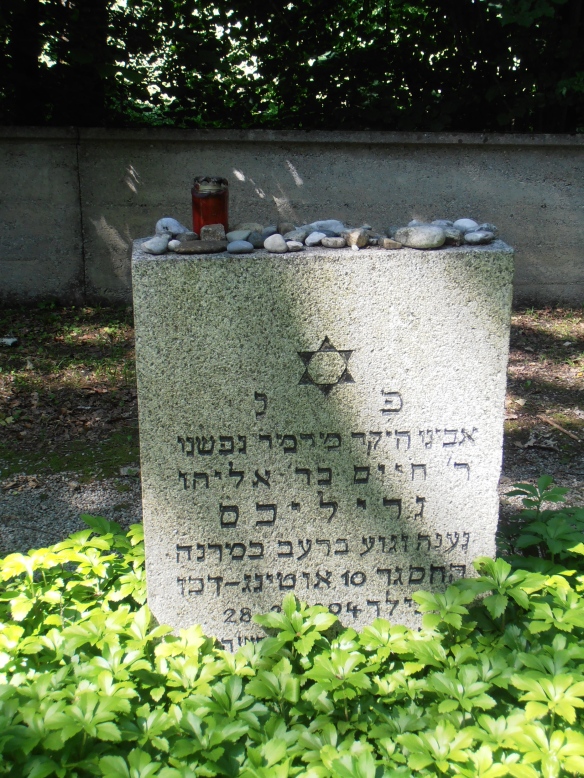 Historical information on the cemetery found here. This is the work of one Othmar Frühauf, who has photo-documented Jewish cemeteries in Germany for Alemannia Judaica (Both links are in German). My hat goes off to him.