>Occasionally people will say that some neglected eyesore of a building looks like something “aus der DDR”, when it has that look of faded, socialist-architecture glory about it. My boyfriend says this too, and he should know, having grown up there.

In Munich there is a particular building, attached to a complex of similar buildings, which has this look; massive, with small windows (for more fortress-like protection in case of attack), peeling paint, grass growing in the parking lot. Former Soviet Embassy? Gestapo building? Nope. 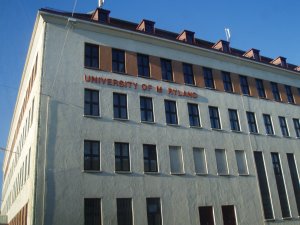 It’s OURS. Or was. This branch of the University of Maryland served mainly the children of soldiers stationed here at the neighboring McGraw base (now closed) and other bases in southern Germany. In 1992 the university moved its facilities to Augsburg, and then to Mannheim, where it is set to close any day (in May, I think.) A cursory internet search tell me that the Munich police now use the building, but for some reason they’ve left those letters hanging up there (and falling down) and haven’t bothered to repaint. I am not quite sure who actually owns these buildings now, and that might be the problem.
Like the war bunkers and monuments, these military-related buildings are reminders of a time past, when the cold war was in full swing.