Continuing in the looking-up-one-thing-and-finding-the-tip-of-the-iceberg vein, I recently began looking into an assumption I had made a while back — that the name Tirol was derived from the Roman fortress Teriolis (from which the village of Zirl takes its name). It turns out that this is completely unsubstantiated, and that the name Tirol came to these lands by being ruled by the Earls of Tirol, who in turn took their name from their home, the castle Schloss Tirol, by around 1141.
Whence the castle got its name remains a mystery. Wikipedia mentions that tir meant territory or land in both Latin and Old Irish (Celtic), and that earlier written versions of the name include de Tirale and de Tyrols.

Ah, that mysterious “y” which one finds in the name when written in English! I had always wondered about that.

Then, poking around for anything on the internet concerning the origin of the name, I came across this interesting treatise (de). (I am not sure what to make of it, exactly — it reads a bit like Tolkien’s backstory in the appendices of “The Lord of the Rings”. It also shares some word-for-word passages with this.) The author (if he is the author) postulates that the rocky hill on which the castle sits had been taken in the early middle ages by conquering Germanic tribes, who named it in honor of the Germanic god Tyr (en) (aka Ziu*, both connected in turn to Zeus deus, deva, and our Tuesday). He adds that before the castle there had been an early Christian church on the site, and it is known that those early Christian churches often were built right atop pre-Christian holy sites. So it’s possible that the name Tirol (or Tyrol) is a very old, pre-Christian one.

The first Earls of Tirol were apparently Bavarian (Bavaria was running the place at the time) but they adopted the name of their castle rather than their family name, which lends a little credibility to the theory that the place name had some ancient meaning. Which nobody would have remembered by the 12th century.

The author also mentions a very curious book called Das erfundene Mittelalter (“the invented middle ages”) by a “chronology critic”, who claims that all the years between 614 and 911 didn’t exist, that everything purported to have happened in that time, didn’t, because of some sort of massive calendar jump. Scientists and archaeologists have debunked this theory.

And, completely unrelated to these places: the name Tauern, given to the Alpine mountain region of Salzburg and Carinthia, is evidently connected to the name of its earlier inhabitants, the Taurisci. After the Battle of Telamon in 225 B.C.E., the beaten Taurisci were allowed to resettle further southwest at what is now called – wait for it — Torino, or in English, Turin.

*Ziu and Zirl sound suspiciously alike. Is it not possible that, the Romans perhaps having latinized an already-given Raetian name for that hill there (now the Martinsbühel), the two names might indeed be related, by way of Ziu? The Roman name for Wilten, Veldidena, is thought to have come from a pre-existing name. Did the Raetians share any linguistic origins with their northern neighbors? One might assume yes, as Germanic and Celtic were both Indo-European. And gods are completely transferable, as history shows us.

Sometimes the act of looking up one thing takes me to another things, and then something else altogether. This post, for example.

This is a path on the west bank of the Ammersee between Utting and Schondorf. The stone column seen on the left bears information about a Roman-era bath house with living quarters, which stood here between the 2nd and 4th centuries C.E.
The building was made from volcanic tuff, brick, wooden posts and mosaic, and its walls were painted with frescoes. It had living quarters and bathing facilities, including a changing room (apodyterion), and baths with hot (caldarium), warm (tepidarium), and cold water (frigidarium), achieved with an underfloor heating system (hypokauste). 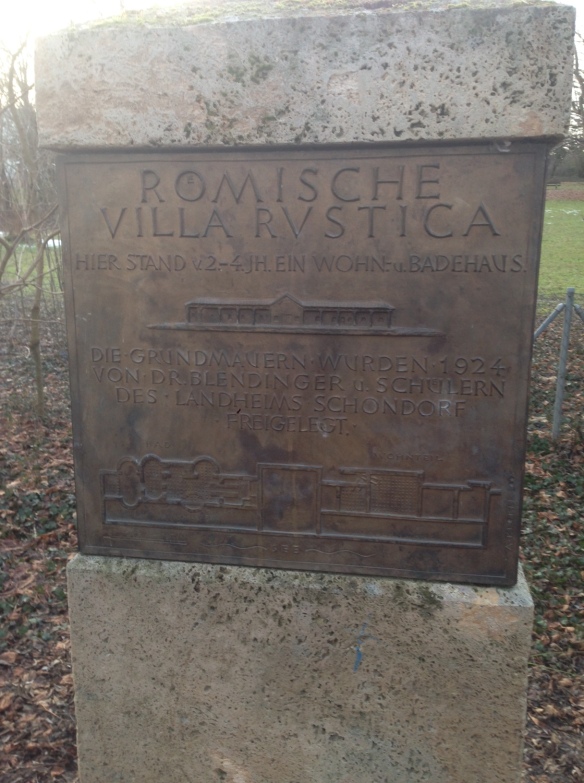 This home-spa belonged to a very nice villa and farm (villa rustica) which once stood a little further up the hill. Situated conveniently near both the east-west Via Julia (Augsburg – Salzburg) and the north-south Via Claudia*, the villa had access roads leading to connecting roads on high ground west of the lake and to the Lech valley further west. It would have provided impressive views of the lake and the mountain range beyond.

According to the plaque, the foundations were excavated in 1924 by one Dr. Blendinger along with his students. Dr. Heinrich Blendinger was director of the nearby boarding school Landheim Schondorf. In 1934 he took over the über-elite Schule Schloss Salem (Salem Castle School) in Baden-Württemberg, just north of Lake Constance. That school has kind and grateful words about Blendinger on their website, giving him credit for the school’s survival through the Third Reich years. A scholarship is given in his name.
According to other sources, Blendinger was not so much “keeping Nazi influence at bay” as he would have one believe from his published memoirs, but an excellent educator who also had impeccable Nazi credentials, and who took over direction of the school after Hahn’s very Nazi successor made a mess of things. All in all one gets the impression he was, if not quite Oskar Schindler, something like that. Former students remembered that under Blendinger’s administration, the school had no racial-idealogy studies, no mandatory wearing of the swastika, and they greeted each other with “Guten Tag” and not “Heil Hitler”. That alone says much about the climate in the school, constantly under threat of being dissolved and turned into a military school.

Somewhat related to the topic: Christoph Probst, member of the resistance group White Rose, attended Landheim Schondorf at age 17 in 1936. As did (around 12 years earlier) Helmuth Graf von Moltke, who had assisted the White Rose in getting flyers to the Allies for distribution over Germany. Another White Rose sympathizer, Jürgen Wittenstein, attended Salem Castle School during Blendinger’s tenure there. He is living in the United States.

*The plaque mentions the Via Claudia as being the road “to Brenner”, which is not clear. The actual Via Claudia ran further west of here along the Lech River and over the Alps at the Reschen Pass. The road now called Via Raetia, which is much closer to this place, does go over the Brenner Pass but was built around 100 years later, and seems to have had no name at the time. It is possible that the new road then took over the official route name, much like highways do today, but I haven’t seen that before in connection to these two roads.