Yes, I know it look like a face in this photo, with a mouth full of pine needles, but that’s a trick of the shadows. There are at least a dozen cup marks in this stone, and they most certainly date back to the Bronze Age. There are various theories floating around as to what purpose these cup marks had. Maybe for ritual offerings, maybe for astronomical purposes or as pre-historic sign posts. Everyone has a theory, no one really knows. There is supposedly another stone nearby, one hill over from the altar mound at Goldbichl. For me it’s fascinating to think that these markings are from modern humans, with just as much intelligence potential as we have today, who lived here in these hills 6000 years ago, probably right where villages still exist today. And that this practice had spread all over Europe, from Merano to Northumberland. What was going on?

Further up the hill, the Lanser Moor, or Lans Marsh, a nature reserve.

Nearby, the Lanser See, a popular swimming hole, deserted already. There’s a chill in the air now, even on sunny days, and swimming season is vorbei. A legend tells of a rich man who envied a farmer’s grove of trees, and took him to court to obtain it. The judge was unfair and the farmer lost his land, but not before he cursed it to sink under water. Which it did, and now we have the Lanser See to swim in.

Thanks to a recent post by a fellow local blogger, I was diverted from my studies by a desire to see a nearby ancient sacrificial burning site, just minutes up the road from town.

Sacrificial burning was, in the Bronze and Iron Ages and into antiquity, a fairly common pratice. The ancient Hebrews did it, and the Greeks, and so did the people of Tirol. Just as the funeral pyre allowed the deceased to leave his or her earthly shell and head off for the great beyond, the ritual sacrifice operated on the same premise; that the sacrificed animal — or object — would lose its material composition and rise as smoke for the gods to receive.

The oldest ritual sacrificial burnings found on the Goldbichl (Bichl is an old alpine word for hill) date back to 2000-1500 B.C. The first altars were clay/mud platforms ringed by stone blocks. Later, a high stone altar was built over the platforms. As clay was necessary to ritual cleansing of the fires, more was applied each time. In this way, the altar grew in height over time.
In the photo above, the level at which the metal signs are found is the natural height of the hill. The mound beyond it is the altar site. 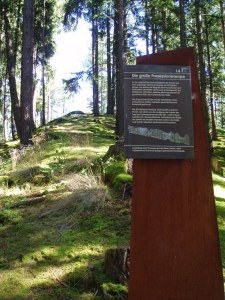 At some point the site fell out of use — possibly its people moved on or were forced away. After a few centuries of disuse, the Raeti crossed the Brenner Pass and settled in. They revived the ritual fires on the Goldbichl, and did some work on the place — they added ramparts, and rose the altar site to a 7-meter-high pyramid. To this height they added a 40-meter-long ramp up the side, which was used as a processional path to the top and led directly to the altar. The ramp lines up exactly with the point at which the sun rises on the summer solstice. Cool, no? I imagine a dawn procession, where the sun rose right up over the fire. Very theatrical.

Archaeologists discovered one Bronze-Age grave within the walls of the site. It contained the burnt remains of a young woman, along with broken pot shards and an intentionally smashed stone loom weight. Beyond its use in looms, which was to keep the vertical threads taut, the loom weight had symbolic value. In Greek mythology, spinning and weaving were analogous to the unfolding of destiny. Zeus’ daughter spun the thread of each human’s life. With this in mind, it is possible to imagine that the woman here was perhaps a priestess. 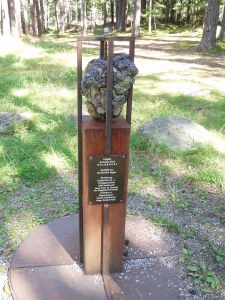 This is a rock which was covered with molten slag. The fire on the Goldbichl reached 1200°C (over 2000°F) which melted nearby rocks. It really must have been quite a show.

The site was destroyed around the time when the Romans pulled in. Drusus and Tiberius, stepsons of Caesar Augustus, led their legions through here on their way to the upper Danube in 15 B.C. It seems that the Raeti, like their Celtic neighbors just to the north, lived on as a subjects, and sent men to fight as soldiers in the Roman army. What happened to them after that, I don’t know. They mingled with everyone else in the Dark Ages and came out as Swiss, and probably there’s some Raeti in modern day Tiroleans as well.
Just up the road toward Patsch we lunched at the oh-so-nice Hotel Grünwalderhof, which has a pretty impressive view. I’m pretty sure we’re looking at the Stubaier Glacier, right above the sails.

More information about the Goldbichl, as well as archaeological finds on display, can be found at the tourist office in Igls.

>I caught this poem in a film clip at the end of Patrizio Guzman’s documentary “Salvador Allende”, read aloud by its author, Gonzalo Millán. I couldn’t find an English translation of it online, so you’ll just have to accept mine. As this poem deals with another September 11 anniversary, it would be interesting to me if someone wrote about 9/11 like this.

The river flows against the current.
The water cascades upwards.
People begin to move in reverse.
The horses run backwards. The soldiers unmarch the parade.
The bullets leave the flesh.
The bullets enter the gun barrels.
The officers put their pistols in their sheaths.
The electricity flows back into the cable.
The electricity flows back into the plug.
The tortured stop writhing.
The tortured close their mouths.
The concentration camps empty.
The disappeared reappear.
The dead leave their graves.
The airplanes fly backwards.
The missiles rise into the airplanes.
Allende fires.
The flames go out.
He takes off his helmet.
The Moneda is rebuilt like new.
His skull reassembles itself.
He walks back out onto the balcony.
Allende backs up to Tomás Moro.
The arrested leave the stadium, backs first.
September 11th.
Airplanes return with refugees.
Chile is a democratic country.
The armed forces respect the constitution.
The soldiers return to their barracks.
Neruda is reborn.
He returns to Negra Island in an ambulance.
His prostate hurts, He writes.
Victor Jara plays guitar. He sings.
The speeches go back into the speakers’ mouths.
The tyrant embraces Prat.
He disappears. Prat returns to life.
The suspended parts are put back into the treaty.
The workers march by, singing.
We shall overcome!

>Do you know that the name Prussia goes much further back than the northern German kingdom with which we mostly associate the name? Prussia was a group of tribes in the Baltics, and the Prussian language (now dead) was related to Lithuanian. After sweeps and conversion attempts by sundry dukes and bishops from further south, then the Northern Crusades (the Teutonic Knights, who worked for the Holy Roman Empire), the Germans finally moved in for good and took over, and the Old Prussian language died out by around the 17th or 18th century.

As someone I knew once put it, referring to Germans from the area as “Prussians” (which they themselves sometimes do) is like speaking of “Manhattanites” ; yes, certainly correct, but with a forgotten back-story of the people who used to go by that name, long ago.

I mention this because I was reading up on the Amber Road on Wikipedia, and saw that someone was angry about using the term Prussia to refer to the Baltic end of the route. Because to that writer, Prussia only meant German military might and all that. And yet, the writer could have easily looked up the name and learned something.

>The Lodenareal, a new neighborhood of apartment blocks in Innsbruck, is featured in an article lauding their low-energy, high-quality Passivhäuser, or “passive houses”; the premise behind these buildings is that they are so well insulated that the heat generated from lights and electrical appliances is enough to warm the rooms, and at the same time having enough fresh air coming in to avoid unwanted moisture. This way, you keep cool in the summer and warm in the winter, and your heating bill is basically zero.
An acquaintance of mine lives in one of the apartments, and she loves it. I hope more of these get built.