Near the Ammersee lies a Benedictine Monastery named for St. Ottilien, or St. Odile of Alsace (A recounting of St. Odile’s life on Wikipedia reads somewhat like a season wrap-up of Game of Thrones.) If you find yourself near the small St. Ottilien train station, you will see a small enclosed garden whose iron gate bears a Star of David. This is the Jewish Cemetery.

In April 1941 the Gestapo confiscated the St. Ottilien Cloister and set up a reserve field hospital there. American troops liberated hospital, overfilled with almost 1,000 war injured, in 1945. Through the work of the Americans, about 450 gravely ill Jews liberated from concentration camps began to be brought to the hospital and nearby school buildings for medical care. 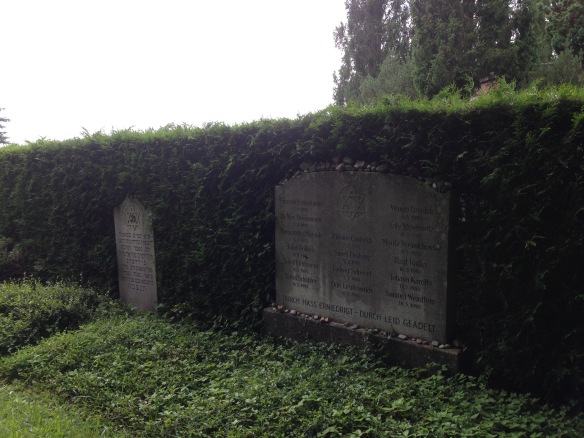 The US Army erected a Displaced Persons hospital, supervised by the United Nations Relief and Rehabilitation Administration, here in May 1945 to handle the constant stream of former camp inmates. The patients were mostly surviving camp inmates and forced laborers from the Kaufering camp complex, and ill persons from the camp at Dachau and its sub-camps in the Landsberg/Lech area. A Jewish community existed on the cloister grounds, tending to its own religious life and customs, until the hospital was dissolved in 1948. These were people who congregated here, then, for lack of the health and strength to go home, or for lack of a home to go to. Some recovered, and some died in spite of treatment from Allied medics, and those are the people who were buried here. 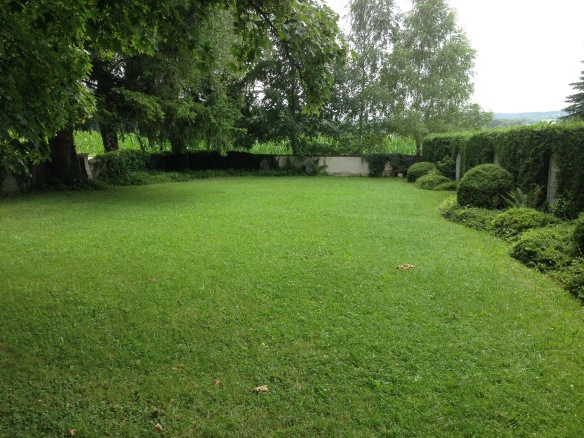 65 people were interred in the cemetery between 1945 and 1948. The first gravestone, bearing a Star of David and nine names, was erected in 1945. By 1950 there were four memorials and twelve gravestones with names and texts in Hebrew, as well as an enclosing wall with its iron gate, and a bench. The gravestones were moved to the edges of the premises in 1968 after several exhumations and transferals of remains. Since 1972 the camp cemetery has held the remains of 46 camp inmates and nine forced laborers. The people resting here came from Germany, Hungary, Poland, Italy, France and Russia; most are known by name. According to the cemetery records at St. Ottilien, 10 of them belonged to Christian confessions:  one Evangelical Lutheran, one Reformed, three Orthodox Catholics and five Roman Catholics.

The camp cemetery in St. Ottilien is a protected cultural site, and its care is overseen by the Bavarian Memorial Foundation (Stiftung Bayerische Gedenkstätten.) The monastery publishes a small and inexpensive guide to the cemetery in both German and English, which includes explanations of the Hebrew tombstone inscriptions.

(The name actually refers to the bicycle route and is not, apparently, what the Romans called it.)

This posting hails from the other side of Bavaria, a “detour” onto the Roman road which follows the Danube and also the boundary separating the Roman Empire (in this case, the province of Raetia) from the Germanic Marcomanni to the north. This border is known as the Limes, and covered the lands on all sides of the Mediterranean Sea, in one form or another.

The Roman Museum in Passau is built on the site of one of the fortified structures from the Roman period, Boiodurum. This name, like many Roman sites in Germany is apparently of Celtic origin. There were people settled on Passau’s peninsula long before even the official founding date of Rome, but according to archaeological finds they were gone, or least no longer present in sufficient numbers (discontinuity), by the time the Romans arrived; no signs of destruction or conflict have been found either. This brings me to something I have been thinking about ever since I started looking at early European history: the way some history texts tell it, the reader can get the impression that the Romans simply arrived one day –  cutting through virgin land with their swords and putting down roads to get to their provincial capitals which had also just appeared out of thin air. Just as there had been settlements here before, and some infrastructure (mule paths over the Alps), there surely must have been some Roman presence here long before as well, even if only in the form of tradesmen or scouts. Polybius made remarks about the Raetians over a century before the transalpine road plans went into effect.

The museum found a creative way to present the Tabula Peutingeriana in a large enough size to actually read it.

There were plenty of Roman soldiers in this “three rivers” area, but other people as well, judging from excavation finds. Below is a type of “diploma” awarded to a Roman soldier after completing his 25-year service (if he survived that long). He got some money and a little set of engraved dog tags, threaded together with wire like a spiral notebook, according him privilege wherever he went. Did Claudius Paternus Clementianus of Epfach possess one of these? Probably.

Part of a roof tile found in the ruins of the Roman Boiodurum fortress at Passau, delightfully marred by a paw print before it was dry.

In Passau one may find a little light shed on the continuity of the place after the Romans withdrew. Roman troops at Boiodurum were among the last to stick it out along the Limes, after other frontier posts had already fallen. Eugippius says that a small group set out for Rome to collect the soldiers’ last pay but were killed by Barbarians, unbeknownst to those remaining and waiting for their return. Eugippius’ biography of St. Severinus mentions “people” – probably both Romans and Romanized Raetians – holing up together in Batavis (the fortified Roman settlement in Passau, on the hill where, not coincidentally, the Cathedral now stands) and defeating the invaders before being urged to leave for safety at Lauriacum (Enns). Eugippus also mentions St. Severinus founding a small monastery at “Boiotro”, most certainly using the existing Boiodurum fortress walls. 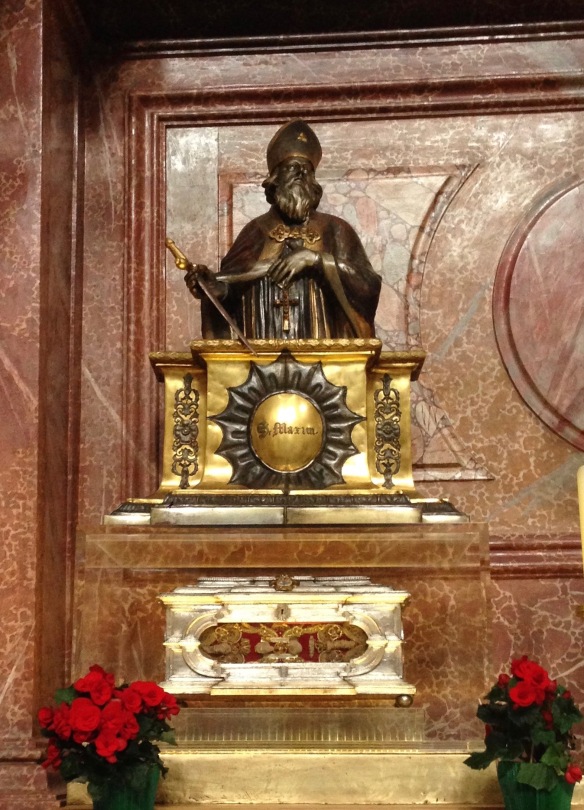 A last sign of the Roman Empire’s long march toward being the Holy Roman Empire: not St. Severinus, but the Holy Bishop Valentin of Noricum (Roman province of Salzburg), who came to Raetia as a missionary. The silver box below his image is said to hold his relics. My understanding of the “Dark Ages” seems to have been a little wrong until now – it was certainly chaotic, violent,  in flux, and certainly dark to live in — but not completely shrouded in misty Unknown. The information is there, you just have to look for it.

There’s more to Epfach, an unassuming little village along the Lech, than first meets the eye. It’s a very, very old settlement, in fact. Older, even, then most German towns — Munich, for example, was first established in the 12th century. Epfach, apparently originally a Celtic settlement, was ideally situated to serve as a station along the Via Claudia Augusta in the Roman province of Raetia. It’s Roman name was Abodiacum, (or Abodiaco, as it’s found on the Tabula Peutingeriana).

The Tabula Peutingeriana, in fact, has two Abodiacos: they are the same village. It stands at the crossroads of two Roman roads : the Via Claudia Augusta, where it’s just after the  station ‘ad novas’ on the road out of Augusta Vindelicum/Augsburg, and the salt road that partly connected Lake Constance (Brigantium) to Salzburg (Iuvavum).
Visitors to Epfach will first see that the north-south road through town is marked as the Via Claudia. Right on this road stands the local museum, which provides information on Epfach’s Roman history, all in a space about as big as my living room. Of particular interest is an exhibit on Epfach’s first internationally renowned local homeboy, Claudius Paternus Clementianus. 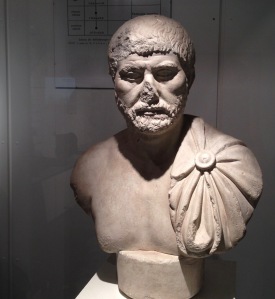 CPC was a Celt with Roman citizenship through his father, which allowed him to serve in the Roman army as an officer. His career took him to Hungary, Romania, Judea (where he served as Procurator there just 80 years after Pontius Pilate held that job, long enough afterward to have probably never heard of him), Sardinia and Northern Africa, before he came home to retire and presumably spend his golden years fishing on the Lech and downing the local wines.

He may have had the good fortune to enjoy his twilight years secure in the belief that the Empire was strong. It was another hundred years before Alemanni tribes began sacking the settlement, followed by the Romans rebuilding it, in turns. The northern frontier (Limes) remained in operation until sometime in the 5th century C.E. Then again, as a Celt, maybe he would have been happy with the eventual outcome.

While Epfach is not on the Via Raetia, there is a connection nevertheless. The Tabula Peutingeriana, a Middle-Ages copy of a late Roman roadmap of the Empire, shows neither the Via Claudia Augusta nor the Via Raetia in their entireties, but rather an amalgam of the two — the route shown follows the VCA leaving Augusta Vindelicum/Augsburg until Epfach/Abodiaco, detours east on the above-mentioned salt road and then resumes its southward way on the newer Via Raetia at Urusa/Raisting (the next stop listed is Coveliacas, near the Staffelsee). This variant may have turned out to have been shorter, the easiest to maintain (the Via Claudia Augusta, in my opinion, goes over much more precarious mountain territory than the Via Raetia), or had better stations, or better connection, or a combination of any of that.

Aside from the museum (open every day, and if it’s not you can ask for the key at the restaurant next door), you can walk to the Lorenzberg, the hill where the Roman military station was located. Epfach seems to have geared its tourism to the Via Claudia cyclists, who can take a break at the restaurant, stop into the museum, walk off lunch with a short visit to the Lorenzberg, and then continue on their way.