My best blogposts lately have been inspired (stolen) from others’ efforts, and this one will be no exception. Earlier this month fellow blogger Paschberg went exploring on the newer trails carved out by the mountainbikers, and came across a rock cliff with cup markings carved into the top. This would be the second set found, after the boulder near Tantegert. Naturally, I needed to go find this for myself, and so, equipped with a marked google earth map graciously sent to me, I set out to find the Schalenstein.

After wandering around the general area (there are all sorts of named and unnamed tracks criss-crossing around over there), I circled back and came across this rock face, part of a longer ridge that cuts through the woods.

And sure enough, at the top was a flat, square-shaped boulder, with three cup markings bored into the surface. I was delighted to find it, and at the same time wanted to kick myself for passing so close to this area regularly for nearly two years, and never looking around over this way. This Schalenstein was practically in front of my nose, or better said, over my head.

Behind the rock is a kind of partly enclosed ledge, big enough to sit on. That’s where I noticed the bolt anchors — there are several of them driven into the rock at different heights. Clearly, this cliff is being used for rock climbing practice. 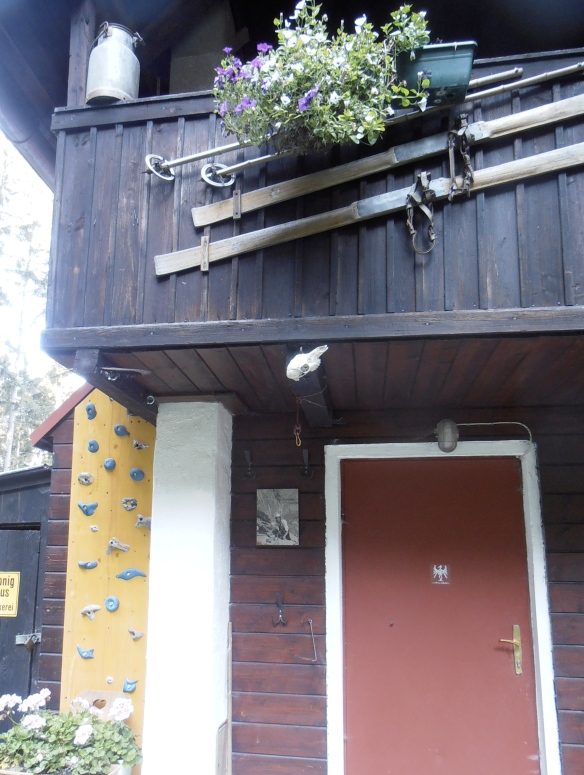 And at the so-called “witch’s cottage”, just a minute or two down the path, it became a little clearer that the climbing practice has some connection to whoever uses the cottage now. Note the climbing holds decorating the wall, and the photograph next to the door.

I walked further uphill along the ridge to inspect more boulders, but they are all covered with thick moss and tree roots. There’s just no telling what’s underneath them. The Schalenstein was the only rock that was somewhat free of moss — which leads me to believe that it’s being somehow, anonymously, maintained.
I once asked an archaeology-minded friend about the cup markings in the rocks here, and she responded with cynicism. There are fakes, there’s no proving their antiquity. She has a point, and the rocks don’t seem to be of interest to anyone official (Not that I can see. Maybe I’m wrong about that.) But they are there. The sacrificial altar sites at Goldbichl and Bergisel are not all that far away, nor is the possibly-Pagan “Judenstein”. It is said there are other marked stones in the area, hidden away in the woods, waiting to be visited.

2 thoughts on “Pagans In Tirol: Schalenstein”