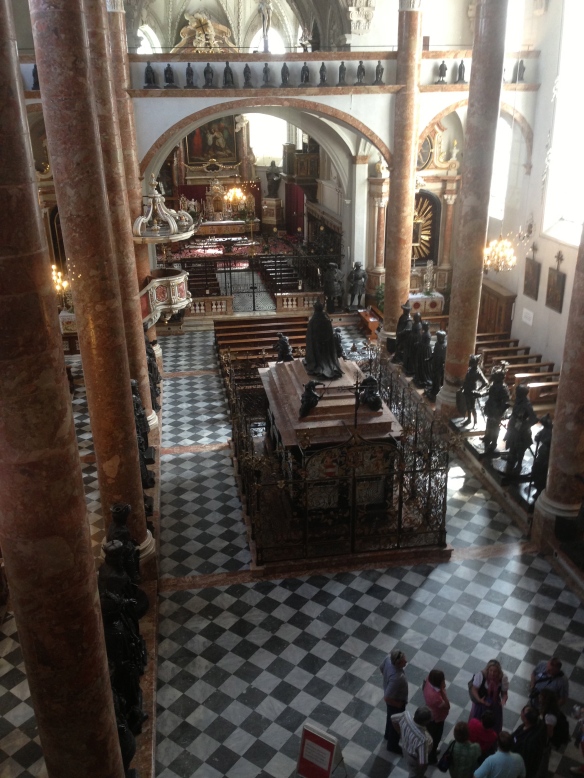 One of Innsbruck’s main attractions for the historically-minded is the Hofkirche, or Imperial Church (but no one calls it that, it’s just always the Hofkirche). As a tourist sight, the plain white exterior is deceiving (I heard it once remarked that the front facade resembles the face of a polar bear, and this pretty much pops into my mind every time I see it.) The interior, however, is impressive.

The Hofkirche was part of Holy Roman Emperor Maximillian’s last will and testament — and a beautiful sarcophagus was made for him there, although actually his remains ended up in the castle that was his childhood home, in Wiener Neustadt.

Keeping watch over this empty sarcophagus (which makes it a cenotaph) are two lines of life-size bronze statues commonly referred to locally as die schwarzen Mander (“the black men”), although they are neither all males nor even black, but more of a beautiful, deep dark chocolate brown.

The English Wikipedia entry for the Hofkirche describes these figures as being of “ancestors, relatives and heroes”, which is the best way of putting it. They are all titled, some go way back into the early Middle Ages (Clovis I, Theodoric), and the existence of one is now questionable (King Arthur, although he was surely assumed to have been an genuine person in Maximilian’s time.)

King Arthur’s statue in the Hofkirche

I always found the large old clock high above the altar in Innsbruck’s St. James Cathedral a nice touch if a little unusual (do you really want your flock to be checking the time during the mass?) but the Hofkirche goes one better with a charming little clock which chimes the hour, as well as each fifteen-minute interval. This morning I had the honor of participating in a special Sacred Heart Sunday mass, which has special meaning in Tirol — in the time of the battles with Napoleon’s troops (see Andreas Hofer), promises were made that, in return for divine intervention on the battlefield, official masses would be celebrated in the province each year. During today’s service, the little clocked chimed throughout, even making the priests stop mid-prayer to wait until the hour was rung. 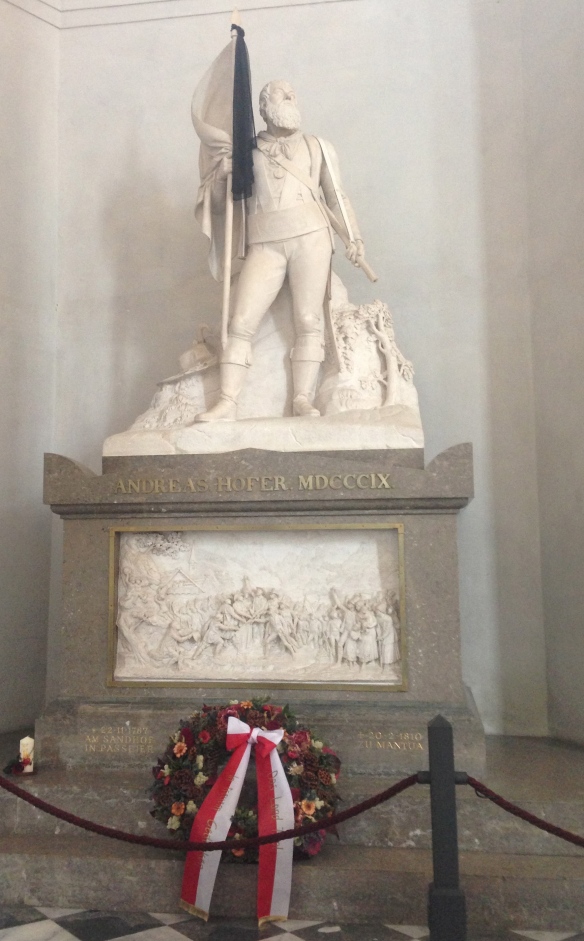 And speaking of Andreas Hofer, he’s here too. Thirteen years after his execution in Mantua in 1810, his body was brought to Innsbruck and laid to rest in the Hofkirche, where his statue guards the entrance.