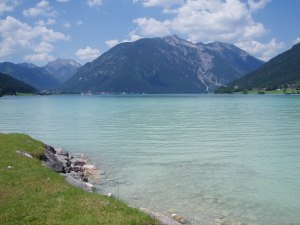 A day trip to the Achensee, a gorgeous lake in Tirol. It’s long and deep (133 meters) but the southern end is shallow and pale, a milky blue-green from the minerals (I think) in the sediment. The water is very clean, but milky to the point where you can’t see your feet when you stand knee-deep in it. 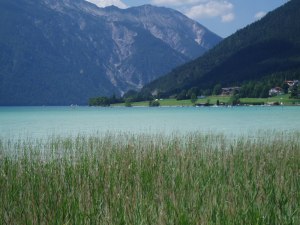 Beyond that point across the water, the lake turns northward, narrows and deepens significantly. There are several diving access points further north, and other villages. There is no road access to the west shore, but there are trails, and ferry service operates from May through October. 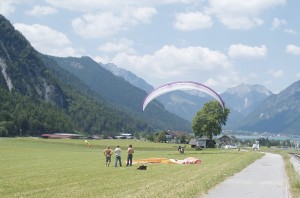 Seems it was perfect weather for paragliding, as there were dozens of them in the air, swooping around over the mountains, catching the currents. One landed practically at my feet as I approached the lake. 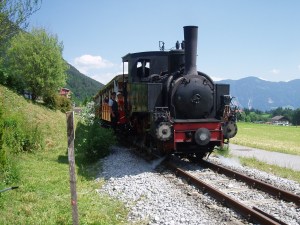 The Achenseebahn, a steep cog rail line which runs from Jenbach to the southernmost boat landing on the lake, was built in 1889 and still uses steam trains, unlike the chic and modern electrified Hungerburgbahn. I’ve ridden it once, it’s kind of fun, but it costs an arm and a leg (€22 one way!) I walked both ways (a good hour each way on the mountain biker’s forest road Via Bavarica Tyrolensis — don’t hog the road, give the bikers room to get past you, it’s their trail.) 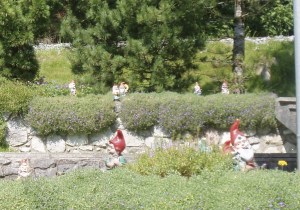 The villages around the Achensee are all about tourism now, and although they’ve kept it relatively tasteful, the area lacks the wild alpine feeling of other mountain lake regions. Here a bit of kitch near the walking path.