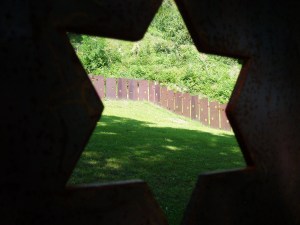 Years ago, walking through the hills along the Inn river, I came across a sign pointing to the “Judenbühel“. It was a half-grassy, half-wooded slope steeply uphill from the river, and aside from a flat hilltop with a playground on it, there was nothing else to help me figure out what the Judenbühel was, exactly. Thanks to the wonders of the Internet, I later learned that it was the site of the old Jewish cemetery, dating back to at least the early 16th century. By the 1860s some problems arose — the new river road made access to the cemetery difficult; in winter it was a steep icy climb to get up there. The lack of access also seemed to have made it easier for vandals to rip out the stones when nobody was around. In 1873 the Jewish community got a corner of the downtown Westfriedhof, the bodies were transferred over, the wall knocked down, and the field left to return to nature. 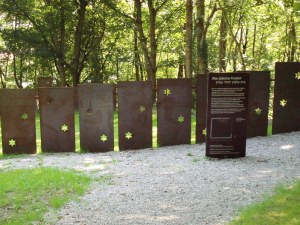 Today I went walking that way again, and found something new: archaeologists found the placement of the old wall, and the city put up metal plates around the perimeter, with stars of David cut out of the metal. A sign explaining the site includes all the parties involved in the project, including the man who got it going: Innsbruck’s Retired Bishop Reinhold Stecher. There was an official ceremony in July, with speeches made and music performed.(Video here) I’m sorry that I missed the cemerony, but happy to see that the old cemetery grounds finally got a little love from the community.