Once upon a time, there was a miller who lived in a small town. This miller was quite successful, and had expanded his business into a large commercial bakery. There had always been a mill by the river — in fact, the town’s chronicle listed there having been one first mentioned in written records in 1398. Imagine that: before Christopher Columbus had even been born, there had been a mill operating on this river, which flows from the mountains and into the Elbe, and then on to the North Sea.

The miller wasn’t really a miller by this point; he was factory owner, a capitalist. He had a spacious, somewhat opulent mansion built on his property, situated on what is actually an island, as the water from the river courses around both sides of it. When he grew old and died, his son carried on with the business. This son was the adventurous type of businessman – several times going bankrupt, but always dusting himself off and getting back to some new scheme. When he grew old, his son took over the business. This new owner married a local girl, a saddle maker’s daughter, and had a daughter of his own.

He was called up to war, but lived through it and returned home to find that parts of the bread factory had been destroyed by bombs, and the country had undergone considerable change. In fact, it wasn’t even the same country as it had been before the war – this was now the “Russian zone”, and shortly afterwards a new country was established, and the government insisted that no single family needed a mansion all to themselves. So the owner moved his family into a few rooms in the house, and other people began to take over other parts of it for themselves.
His daughter grew up and married a veterinarian in the hill country, 3 hours away. They had two sons, who enjoyed visiting their grandparents and playing with the neighbor children in the mansion’s expansive orchards and courtyards, where they would set up a tent under a chestnut tree. You would think that the children would have enjoyed playing by the river, but the river was polluted, and had an unpleasant smell. No one wanted to swim in it, although the boys’ mother recalled doing so as a child. This astonished them, as they couldn’t imagine that it had ever been clean, not knowing it any other way.
The owner’s wife fell ill and died, and the old widower married a somewhat younger spinster, the daughter of acquaintances who was happy to have a husband, even a frail one. When he died, she stayed on but eventually began to hoard items as the house fell into disrepair around her. 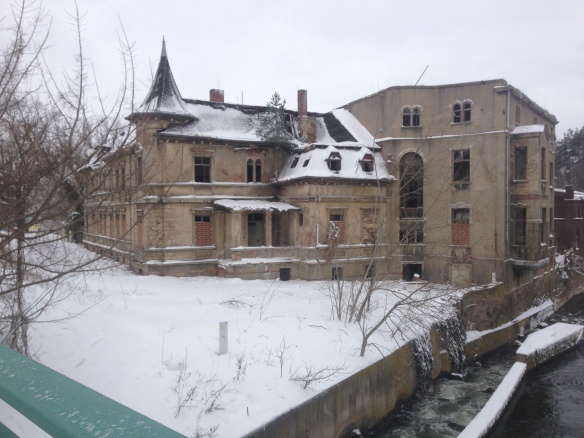 One year, the grandsons (now young men) were sent by their parents to clean out some of the junk in the old villa. They found piles of stuff, including old C.A.R.E. packages sent at Christmas by relatives in the West. Their contents – soap, coffee, chocolate – had been unwrapped, dutifully admired, and put back in the boxes for safekeeping, until they were decades past their use dates. The two brothers laughed and shook their heads at this unintended waste, and tried to throw them out, but the old widow kept running out to the trash container and bringing things back inside.
Well, time passed. The Wall fell a few years later, and the old widow passed away. No one in the family had any reason to visit that town anymore, as those relatives were all gone. The family tried to sell the decaying property, hoping that a speculator from the West might pay good money for prime riverfront land, but no one was interested and eventually it was bought cheaply by a developer, who tore down the old factory to make room for low-cost apartments, but saved the chimney and the old villa. Maybe he ran out of money before he could get around to the villa.

One of the grandsons, now in middle age, was passing through the area with his wife, and decided to swing by and see the old homestead, that expanse of small town property which, as his grandmother used to tell him and his brother, would be theirs someday. It filled him with memories and emotions: happy memories of childhood summers spent there, sadness in seeing the old place in such a state of ruin. There is a new developer who, two years ago, said he wanted to build apartments there and save the old original facade. Maybe he will, someday. 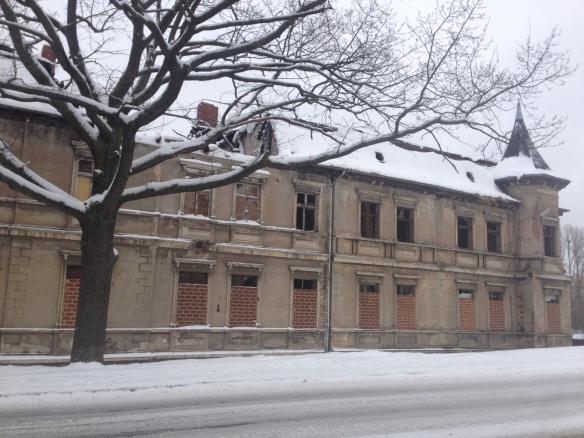 2 thoughts on “A story of changing times”