I previously blogged about the village of Utting am Ammersee in connection with the small, hidden cemetery for nearby concentration camp victims there. Today I have another unusual place to show you — the rectangular earthwork (Viereckschanze) in the fields just west of the village. 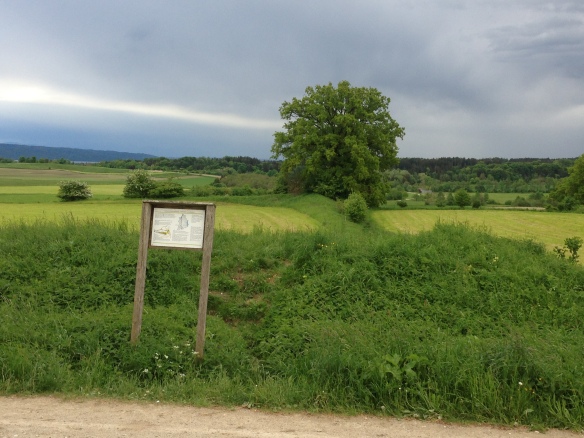 This earthwork was built around 200-100 B.C., in the late Iron Age, by the people we call Celts. According to local sources the Roman Via Raetia (laid down after 15 A.D.) passed right by here, possibly within a few meters of the earthwork. 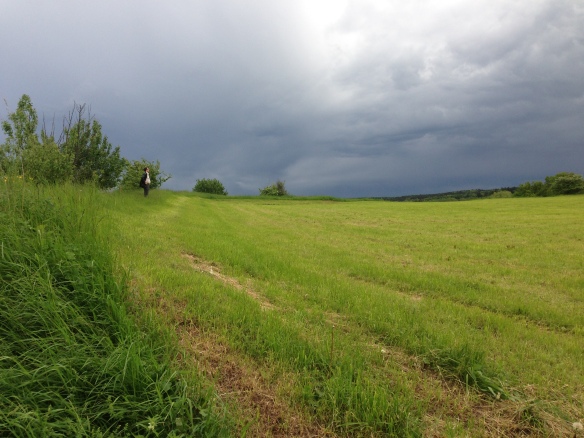 There are approximately 150 such earthworks of this kind (not including grave mounds and other types) surviving in whole or in part today in Bavaria alone. The one in Utting is one of five in the county, and an unusually large one with an inside area of 12,000 square meters. 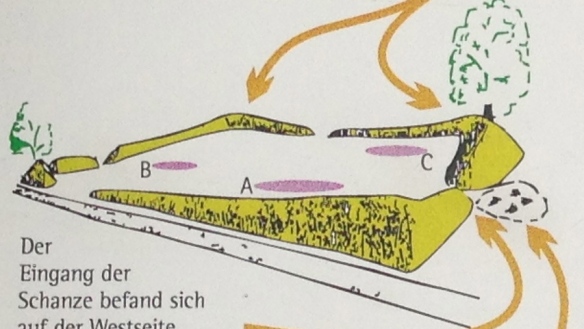 According to information given on-site, research of some kind (a divining rod is mentioned) has revealed evidence inside the enclosure of the existence of A) small buildings, B) a sacrificial site, C) a hole with wooden support walls.

I have to add here that the western side of the Ammersee, we are learning, is some kind of hotspot for the esoterically-minded, and evidently has been for quite some time, as least as early as the 1920s. The sign at this earthwork clearly reflects this, with breezy assertations that the small buildings were temples, the hole was for divining energies, that the whole thing was primarily used for “cult-religious purposes and activities, teaching and passing on of traditions, adjudication, observance of nature and the heavens.” It goes on to say that

the Celts lived in close harmony with the laws of nature. They sensed unseen active entities, forces and energies. They built their ritual sites on places with particular characteristics. These phenomena can evoke internal visions, colors, sounds or moods even today in people who are especially attuned to listening to them.

Now, there may be something to the idea that people of all eras feel a certain affinity to certain places. I have come across some theories that medieval churches were built on pagan sites not just to wipe out the old gods but to capitalize on the good vibes attributed to the particular place. That’s plausible. Certainly the Celts were more in tune with the laws of nature, as were all people living at the time. But the idea that these earlier people had time to spend tuning into the universe, observing nature and digging the force fields is, to me, a bunch of hooey. Sure, this Schanze may well have included some religious purpose, in the sense that one might feel the need to pray to one’s gods while barricaded inside. These earthworks offered protection, possibly against invaders, or animals (bears, wolves, wild boars). They offered a good surveillance view of the surrounding lands. They offered safe places to keep foodstuffs and materials (leather, bone, wood) awaiting processing. Sure, the Mayans and the Egyptians built pyramids (or, better said, their kings and pharoahs made them do it.) I cannot believe  that the Celts were not too busy, just from trying to get through the winter, to expend time and energy on this sort of thing for the express purpose of being One With The Universe. Perhaps they had one Shaman who did that, and it was built for him (or her.) But then, we are back to today’s system, with a village of farmers and one parish priest. Perhaps the most powerful families maintained these enclosures, like an Iron-Age version of the Kennedy Compound. Many large farms around here have their own little chapels on their grounds (in fact you can have one built these days — we watched one go up in Eching, passing that farm regularly.) Since we are walking around today with basically the same faculties as our ancestors had 50,000 years ago, I see no reason to believe that the people who built the Schanzen were any more enlightened than today’s modern Bauer.

Still, it’s quite something to be on an earthen structure which has survived over 2000 years.

If you go: you can find the earthwork very easily on Google Maps (WNW of Utting, no coordinates needed:just  look for the word “Keltenschanze”). There is parking just off the ST2347 (Landsberger Strasse) and then it’s a few minutes walk on well-maintained gravel roads.

2 thoughts on “The Viereckschanze in Utting”