This plaque happens to be on the front of my own apartment building, but it’s something you see often in certain parts of town, and in many Austrian towns. It says “This building was destroyed in the war years 1939/45, and rebuilt in the years 1957/58 under Chancellor Julius Raab, funded by the Federal Ministry for Commerce and Reconstruction.”

The Firestorms and massive wholesale destruction suffered by many German cities did not reach Innsbruck, but there were heavy bombings, and substantial damage inflicted upon the city. Innsbruck had begun to take on some of the armaments production, and had always been a strategic hub between Italy (via the Brenner Pass) and Germany (via the Inn Valley.)
On December 15th, 1943, the first air raids came with 48 B-17 (“Fortress”)Bombers and 39 P-38s (Jägers), dropping 126 tons of bombs on the city, mainly targeting the railways. On this day 269 Innsbruckers were killed, 500 wounded, 1,627 left homeless. Incomprehensibly, not long before the first attacks occurred, the regional government (Gaubezirksgruppe) expressly forbade the construction of tunnels in the mountainsides for bomb shelters.

A second wave of bombing came 4 days later, on December 19, leaving 70 people dead. Only after January, 1944 did work begin on the bomb-shelter tunnels, thanks to approximately 600 forced laborers and Soviet prisoners of war. 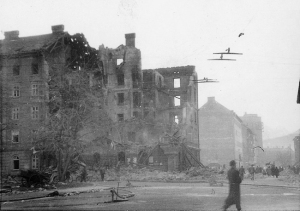 Attacks continued intermittently until the war’s end. In December 1944 bombs destroyed many central, public buildings including the railway station, town hall, cathedral, courthouse, and
municipal hall (Stadtsaal), killing 35. This time the NS press accused the enemy of “being no different from the Asiatic animals in the east”, for supposedly targeting civilians. 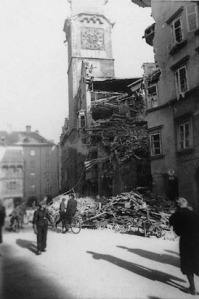 The mass evacuations out of Innsbruck and into the surrounding countryside led to further chaos and misery. The detention camp in Reichenau filled up. Seven foreign teenagers were hanged for “plundering”, having been caught with bread and marmelade, presumably purloined. A 34-year-old woman from Tirol was sentenced to death for stealing clothing from another woman’s suitcase.
By the time the American tanks rolled in (to much rejoicing, particularly because the townspeople had heard terrible things about the Russian soldiers and feared they would get there first), over 500 of Innsbruck’s citizens had been killed by Allied bombs, over 50% of the city’s buildings were destroyed, 2,062 of its young men had fallen in battles all over Europe, 1,228 returned wounded. These numbers do not include those killed by the NS government for racial and/or political reasons, nor the unknown number of forced laborers who died either during the air raids or “in custody.”