The “Tummelplatz” is a small field of memorial markers for fallen soldiers, tucked away in the wooded hills just above town. Originally a riding area for nobility, it was used as a war cemetery from 1797 to 1856. Since that time it has been filled with hundreds of markers honoring soldiers who have fallen on foreign soil, and whose bodies were never recovered, in the First and Second World Wars.
I have visited the Tummelplatz often; it’s just along one of my favorite hiking paths to the lake at Lans, and an interesting place to see. Each marker is individually designed, and often with a photograph of the fallen attached to it, with a few words: his name, age, and where he fell. As is the case with those missing in action, often this place was the only kind of “grave” the family had. I have included a few photos here, so that you can take a look at these “Nazis” yourself. Most of them were no more than boys, and none of them have the stiff, menacingly serious look that American military portraits have these days. They were young, and had absolutely no choice in the matter of joining up (refusal led in many instances to arrest, imprisonment, trial, execution.) Many of the markers speak of a “heroe’s death”. 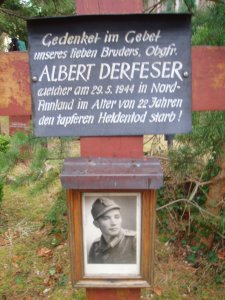 Swastikas or any kind of Nazi symbols are nowhere to be seen (except, sadly, where someone defaced a chapel wall with spray paint.)
Is it wrong to honor a dead soldier if he died for an ignoble cause? Is it wrong to grieve for a son who shipped off to the Russian front, never to be heard from again? Of course it isn’t. The Tummelplatz reminds me that the last war is still a bit of an unhealed wound that people would rather forget than be confronted with regularly. There’s much to learn in the faces of these boys, which they themselves never had the chance to learn.