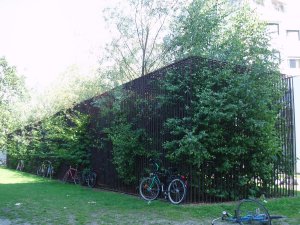 Behind my workplace is a complex of buildings referred to as SOWI (“so-vee”), a contraction for the University of Social Sciences. On one of its lawns stands a large, apartment-sized iron cage, containing a small, dense forest and doing double-duty as a bicycle stand, and bearing the unglamourous name “Garden for the New SOWI Building.”

As usual in Austria, in public buildings a certain amount of public money is spent on Kunst am Bau (art on public buildings). Selected artists are invited to present and incorporate their work into the context of the building…. The work is an impressive iron cuboid: 37m in length, 4m breadth, 3.7m high, made of steel (33mm) and a weight of 22 tons.
(Richard Weiskopf, Institute of Organization and Learning, University of Innsbruck.)

This “iron cuboid” was described by its artist in an interview as a “sign for deliberate renunciation of Gelassenheit (serenity) and non-intervention”:
“Within the boundaries I let things just occur: the planting, the becoming, the perishing, the permeability for the wind, the birds, the water.. . everyday rubbish does not have to be removed immediately.. .because out of the beautiful, pure, true, clean nothing emerges anyway…”

Events were organized which attempted to transform the “iron cage” into a “house of fantasy and desire” (some guy was actually living in it for a short while) the media commented on the event, others used the work as an occasion to protest against the “waste of public money” and the “death of social policy”, etc. (Which always happens when controversial art appears at taxpayers’ expense.)
At one point, some protesters took their cue from the artist’s own words and began stuffing trash into the cage, leading to fears of the thing attracting rats, leading to a clean-up effort. Nine years later, there are trees growing out of it, as you can see from the photo. To me it’s a reminder of what happens when man ceases to “manage” the land around him. Forest appears. Which is interesting since it’s across the way from the “Management Center Innsbruck”.