If one is interested, as I am, in the routes of the Roman roads in southern Bavaria, then one has probably heard of Raisting; the north-to-south road from the Brenner Pass to Augsburg (Via Raetia) and the southwest-to-northeast road from Bregenz to Gauting intersected here. Evidence of the latter road can be found further west, but the former has left traces in the land here which can be seen from the air. I wanted to find out what can be seen from the ground, and I wasn’t disappointed.

First one travels south of Raisting, to the field of giant satellite dishes belonging to the German Postal Service. Our starting point will be this church.

The old pilgrimage church St. Johann is supposedly the oldest church in the area, founded in the time of the first Christian community in Augsburg. This thesis is based on the fact that the old Roman Augsburg-Brenner road lay just 100 meters west of it.
According to legend it was built “on a holy place” by Tassilo III (748-788), the last Agilolfinger Duke. Tassilo, so the story goes, got lost on a hunt in the woods between the Lech and the Ammer rivers. He swore that when he figured out where he was, he’d build a church on the spot. Eventually he reached an open space from which he could make out the lake, and that is where Tassilo built his promised chapel. The altar was placed over a spring. (A church on a “holy place, built in the region’s earliest days of Christianity, with the alter over spring, near the Roman road? That sounds suspiciously like the former site of a roadside pagan temple.) 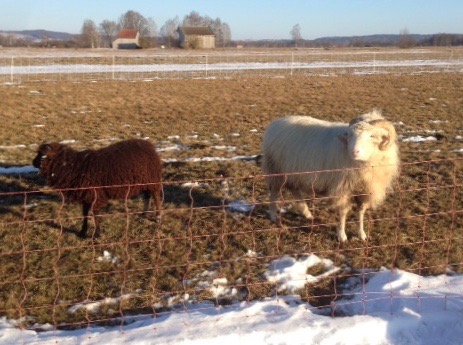 It was especially cold last week; the welcoming committee was surely happy to soak up the warm sunshine today. Our instructions were to follow the road past the church until the second ditch, and then look southeast into the field. And lo… 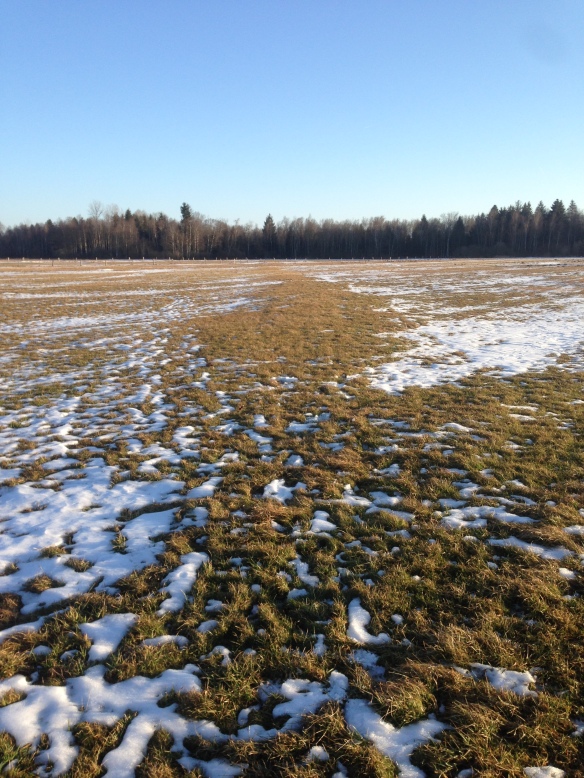 It’s difficult to see in this picture that the ribbon stretching before us is slightly raised, but it is easier to tell its presence by its lack of snow — underneath lies the pebble road bed. We left the marked road and trekked into the field.

And met up with a barbed wire fence. Which didn’t stop us, we slid over /under it and followed the track to the end of the field, observed only by a small herd of camera-shy deer. Here the road alignment is even clearer to the eye. There is supposed to be the remains of a peat cutting ditch in the strip of woods straight ahead, but we saw only a small border stone marker poking out of the deeper snow before turning back.

The satellite facility is surrounded by farmland and is easily accessible. It was impressive to see them up close. With the Via Raetia, St. Johann church and the satellite dishes, we had 2000 years of human achievement presented before us in one short walk.

And here the route of the Via Raetia is still in use, as the main road through Raisting and Diessen, after which it veers slightly westward on its way toward Augsburg. The next place to trace its route is in Achselschwang, which we documented back in May 2014. It has since become a regular walking route for us.

2 thoughts on “In Via: Raisting”