I admit it, I find some cemeteries interesting. On a recent outing we passed by the Pradl Cemetery, the southeast corner of which holds a military section. Above is a monument erected by Italy in memory of the Italian soldiers who died in Tirolean military hospitals. Below, their graves. 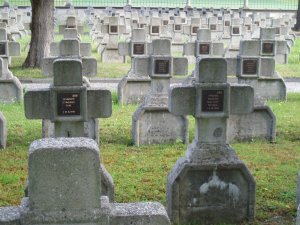 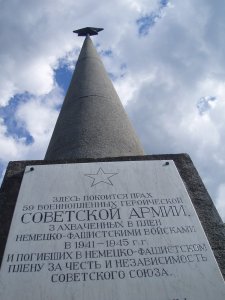 A monument erected by the Soviets to honor their fallen victims of the “German Fascists” (Nazis).
The markers below were not immediately recognizable to us from a distance, but their import became clearer when we recognized that each is capped with a red fez. They are the graves of Bosnian Muslims who’d fought for the Austrian Empire in World War I. Their graves face east. 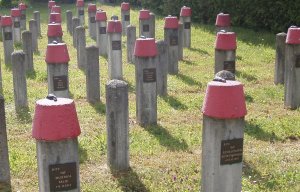 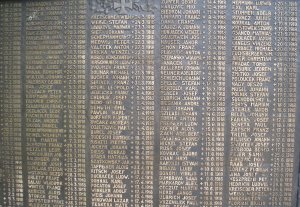 One of several plaques of names of the fallen. Names upon names upon names. Nearby are graves of POWs, victims of the nearby concentration camp (in Reichenau), forced laborers from Poland. It looks to me as if it was first planned that each group have its own separate area, but that as the dead began to add up, they were put here wherever there was room for them — leading to an interesting mish-mash in some corners of soldiers and civilians, equal and side by side in death.
This part of the cemetery, while maintained and spotless, looks as if very few people come here. And why should they — these graves are very old, and their occupants are from far away lands.